I slept terribly in Bellingham, the facilities consisted of a large hall with lots of people sleeping on the floor making various noises none of which were conducive for inducing sleep. My cough was going crazy and on more than one occasion I coughed up bile into my mouth which I then had to swallow, not a particularly pleasant experience. I maybe managed an hours sleep out of the four I was lying down. Unfortunately the other runners probably didn’t get much sleep with my constant coughing – I do apologise of this and to anyone else I disturbed/annoyed with my coughing throughout the duration of the race.

My feet had held out well, other than a few small blisters and some swelling the only other problem I had was soreness on the balls of my feet. The medics patched them up with some k-tape and moleskin, and after a bacon/egg sarnie I was ready to leave.

Upon entering the car that was to transport me to the start of the next stage I was informed I had 3 options :

I decided on sleep mode, which I suspect most people did although I didn’t manage to get any.

I arrived at possibly the longest named enclave in England, Cottonshopeburnfoot (I’d love to know how they arrived at that name. I envisaged early settlers being drawn to the area in the hope of becoming rich growing cotton only to find it burned to the ground and trampled by a marauding tribe of English soldiers off to fight the Scotts).

As when I left Alston my achilles were so sore I couldn’t even walk up the steady incline that greeted me. A combination of propelling myself with my poles and walking backwards helped to the point that after about 20 minutes I could walk with mild discomfort instead of debilitating pain.

I climbed up onto the border ridge and felt instantly at home – the Cheviots are my local hills and have traversed this ridge many times.

A few miles in and I started to experience a bizarre sensation of confusion, light headedness and nausea. It was very strange and not something I’ve previously experienced. It almost felt like an out of body experience and I wasn’t really there. I didn’t see any goblins jumping out from behind any boulders but there were definitely some funky things going on with some of the rocks and clumps of grass around me.

There were a few headtorches around the hut at Lamb Hill but apart from being spaced out I felt ok so pushed on.

As dawn approached sunlight started to break through the thin layer of mist that enveloped me and I started to see faint outlines of the surrounding hills rising above me. This further heightened my dream like state and I felt like I was on another planet. 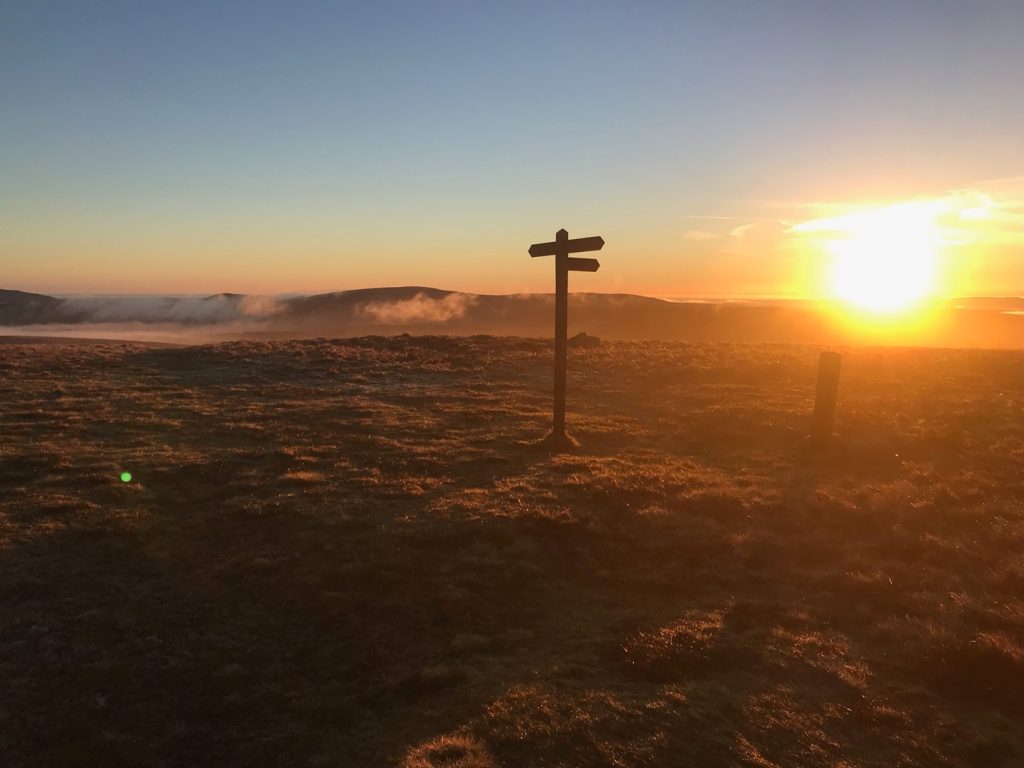 As I crested Windy Gyle I broke out of the mist and was treated to a stunningly beautiful panorama of hills and cloud inversions. It broke my dream like state and suddenly I felt more alive than I ever had been. I could see the Cheviot up ahead and The Schill beyond it with Kirk Yetholm hidden just beyond.

I spent a few minutes taking it all in and finally let myself believe that I was going to finish the race and relax. It was such an amazing feeling.

Pushing on from there and on the climb up to the Cheviot I met my good friend and fellow Saltwell Harrier Iain Armstrong. He’d got up with the larks to come up and see me and it was great to see him. We walked for a little as far as Auchorpe Cairn before he wished me well for the rest of the race and departed back to Langleeford.

As Iain departed I stood at the top of Auchorpe Cairn and gazed downwards towards Auchorpe Hut and the Schill in the distance. The view from here is beautiful and one of the best to be had in the Cheviots – today it was particularly stunning.

For so long I had been looking forward to this moment, I’ve stood in this spot countless times and I could have ran to the finish blindfolded.

I could now stop worrying about whether my feet would hold out, whether the pain in my ribs would incapacitate me, whether my cough would become debilitating, whether I would wander off course in my sleep depraved stupor, whether the tendonitis in my knee would flare up again, whether the tiredness would overwhelm me or I would pick up an injury that would either stop me or reduce my pace to a crawl enducing a death march to the finish.

It felt effortless and I flew down the steep descent to the hut, falling over twice but it didn’t matter. Past Auchorpe hut which resembled a mini festival site with a number of tents pitched out, past the boggy traverse and climb up to the Schill. 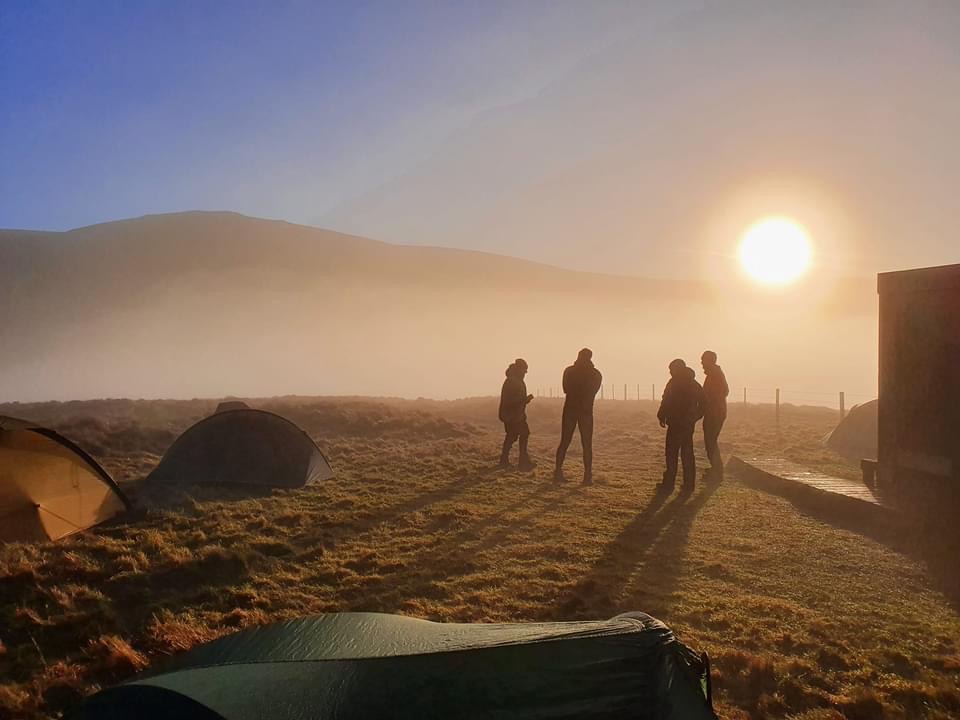 Down the brief steep descent from the Schill, across the border into Scotland and down the lovely grassy descent which I took full advantage of. Onto the final miles along the road including heartbreak hill and the final descent into Kirk Yetholm.

Those final 7 miles were pure flow and I didn’t want it to end.

Alas it did though, and I crossed the finish line and touched the wall of the Border Hotel 124 hours 37 minutes and 58 seconds after leaving Edale. I’d covered 260 miles climbed/descended over 40,000ft. I’d been on an emotional rollercoaster and had to dig deeper than I ever have in anything I’ve previously attempted and finally achieved a goal I’d been working towards for over 3 years. 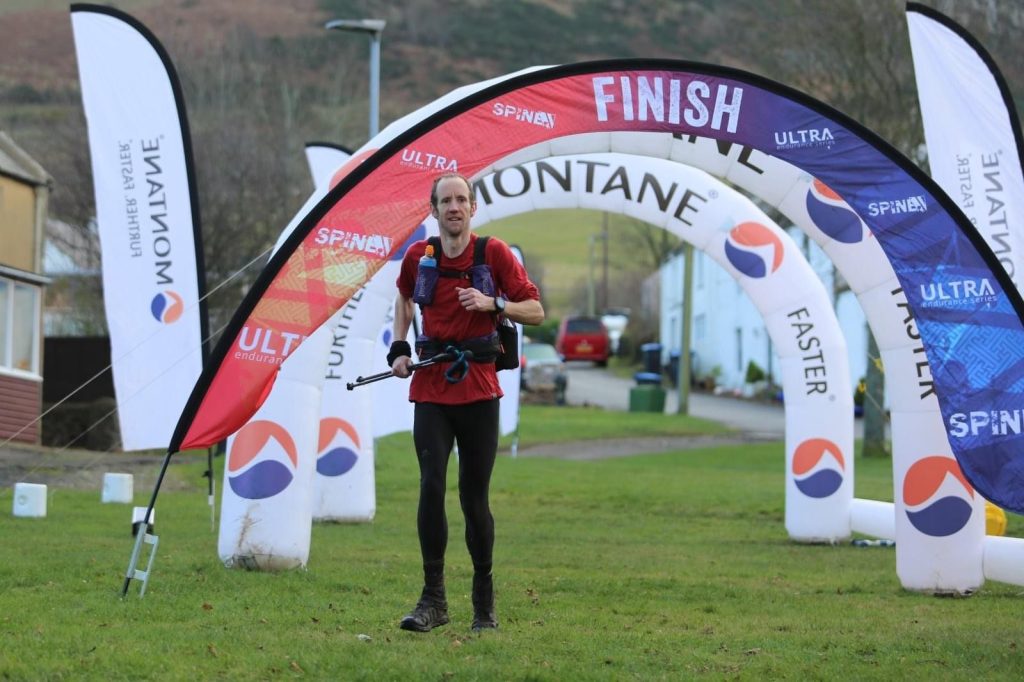 To say I was happy is an understatement.

I’m writing this just over a week after finishing the race still in a bit of a bubble and trying to make sense of everything. This race is by far the hardest thing I’ve ever undertaken.

I went from amazing highs to crushing lows, sometimes within minutes of each other.

Despite lying down for longer I only managed around 7 hours sleep over the course of the race, largely as a result of my cough and sounds from other runners (snoring, moving around, talking/shouting etc).

I was happy with the way my feet held, not so with the amount of time I spent faffing at checkpoints it’s unreal how quickly the time slips away.

It’s the inevitable question – why I put myself through so much pain and suffering for relatively little gain other than to say I’ve completed a race of XX miles.

Everyone has their own reasons, mine probably aren’t that different from most.

I’ve always been a very goal orientated and competitive person and like to push the limits of what I think I’m capable of. I get a great deal of satisfaction from successfully completing a challenge of which there is a high chance of failure. Of all the challenges and races I’ve previously attempted I’ve always felt reasonably confident that I’d have a chance of completing them. Not so with the Spine, there’s just so many factors involved even without the complications I had leading up to the race. It’s definitely outside of my comfort zone

I strongly believe that being able to deal with setbacks and adversity in a race stands you in good stead for dealing with similar challenges in daily life and in my opinion makes you a stronger person and have a better chance of living an adventurous and rewarding life.

The past 2 years have been tough. I’ve had chronic pain and muscle wasting/weakness in both shoulders and tendonitis in my knee for most of them. I’ve dnf’d 2 Dragons Back Races, The Cheviot Goat and a Paddy Buckley Round so to actually complete a major challenge again is a massive boost and gives me a lot of confidence and hope going forward.

I’d like to do the race again and be competitive, but it probably won’t be next year as I’m going to be doing an expedition race in Arctic Sweden which is likely to be in February so looking at 2024.

Time for a good rest now and reflection and look forward to future challenges and adventures.

Everyone loves a good kit faff

This isn’t a comprehensive list but covers the main things I used: