Upon waking I was informed the party was at Middleton, with a large proportion of the remaining runners being here. It was also stretch Wednesday where historically there is up to 100 miles between the back and the front of the race.

I left the warmth and shelter Middleton at around 5:30am and made decent progress along the 5 miles stretch of farmland close to the Tees and passing Low and High force, although it was dark and I didn’t have the chance to fully appreciate their majesty.

Climbing out of the shelter of the valley I was greeted by a stiff icy cold wind so I pulled on a couple of extra layers and pressed on and took the long road diversion that had been put in place to avoid the scramble up Cauldron Snout as it was apparently covered in ice.

I climbed into the clag and upon reaching High Cup Nick there was unfortunately no view to be had so I pushed on before exiting the clag at Peeping Hill and seemingly into another world. A vast panorama opened up over the Eden Valley towards the Lake District, the sun was out in full force and it felt like a summers day.

I arrived at the monitoring station in Dufton where I attempted to eat a rank dehydrated meal, most of which ended up in the bin. Another competitor was sadly retiring there after taking a dunk in a beck and bruising his shin.

One of the race officials asked if I could take a COVID test because of my cough which sent me into a small panic. It was a beautiful day, I was feeling good and starting to believe I had a chance of making it to the end. Please don’t let my race end because of COVID.

Thankfully it was negative so I set off up the long climb to Knock Old Man and the Cross Fell plateau. Near the top I went into the clag again and the wind picked up considerably (the notorious Helm wind – the only named wind in the UK) but I made decent progress over the ridge without any nav errors and got to the other side in daylight.

I slipped and fell descending from Cross Fell I didn’t hurt myself but I’d taken my waterproof trousers off at Dufton so my bottom half got soaked.

The Noodle bar ran by John Bamber from Greggs Hut is a Spine institution and I arrived there as dusk with another 2 runners Liam Vines and John Slater (who I would see again at various points before and at the end).

I spent around half an hour there getting warmed by the fire and eating some tasty chilli infused noodles. Delicious.

Alas I had to get moving again and once on lower ground out of the wind it was actually a stunning night with the stars and moon particularly bright and lighting the way.

There were 2 reasons I was looking forward to arriving in Alston. The famous lasagne and Alston was the first Youth Hostel I ever stayed in, my Dad taking me there on a walking holiday when I was 10 so it holds particularly sentimental value.

The lasagne lived up to its reputation and, as per every checkpoint I’d been to, I was well looked after. As soon as I arrived people were helping me – giving encouragement, helping me put shoes on/off, feeding and watering me, asking if I needed any medical assistance. 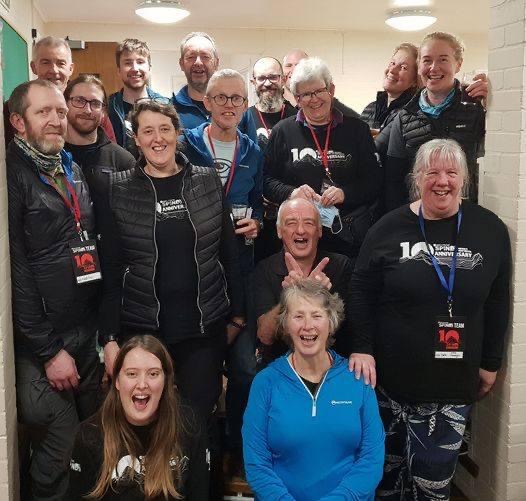 The race is supported by over 100 volunteers, many who have done the race, others aspiring to do it but all who understand what it takes to compete in this type of event and are sympathetic to a runners needs.