It was daylight when I awoke and I was conscious about getting moving as quickly as possible but also conscious that my cough had worsened and was letting me know about it. I sought medical advice from one of the doctors on the medical team. She asked if I was bringing anything up, if I was breathless or if my heart rate had increased the answer to all of which was no. She told me that it was okay for me to continue, however if any of those things changed then I should stop so I was good to go.

I hadn’t checked my phone up until now – there was no reception at Hebden, but I had a quick check to see where Mark (Clarkson) was. He was well ahead and in the top 10 which gave me a real buzz, I knew he’d do well in the race.

I left with Martin and Mark and we started the long slog up Great Shunner Fell, the 2nd highest point of the route. Martin dropped back a little as he was on the phone to his wife and Mark was struggling with climbing after contracting COVID a while back so I pushed on ahead on my own. A number of times on the climb my cough had me bent over double and nearly being sick, it was a definite low point.

The conditions were good though, a definite improvement from the previous night. It was still cold and a bit blowy but it had stopped raining and visibility was excellent.

The next section was uneventful, and I rolled into Tan Hill late afternoon and promptly ordered some chips and coke to fuel the next section. 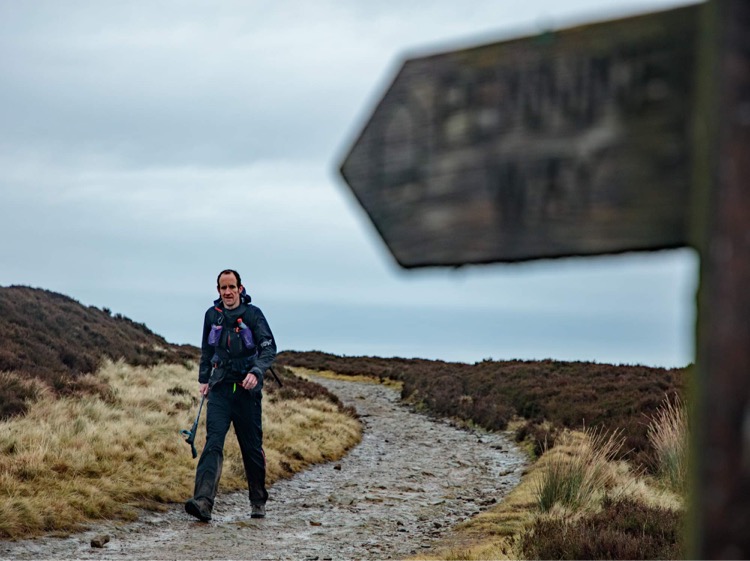 Martin had pushed on a little so I left with Mark who had caught up and also walked for a while with Stephen Brown, a veteran of the Spine who I believe has completed it around 5 times. I kept seeing him in checkpoints but this was the first time I’d been able to spend some time chatting with him.

It turned dark as we crossed the quagmire that is Sleightholme Moor and we caught up with Martin again just before Gods Bridge and a tricky navigational section.

The remaining section was quite dull especially in the dark but we made good progress and arrived into Middleton at 10pm.