As I was heading up the road out of the checkpoint I passed Silvia (Delgado Ortiz). I’d met Silvia at the Dragons Back the previous year and knew she was doing the Spine so it was good to see her and speak for a few minutes.

The next few hours were an uneventful trudge through clag and dark not being able to see anything. I didn’t feel overly tired in this section but my spirits dropped and I struggled for motivation. I briefly popped my head into Top Withins as I passed, however I stumbled and almost fell into the bothy where about 5 people were huddled trying to sleep. I didn’t endear myself to them much more by my stumbling apologies and inadvertently shining my headtorch into their sleepy faces. I made a hasty exit before I was lynched.

I made a slight nav error shortly afterwards and noticed that my watch was stuck and I ended up having to restart it. Following this it was never quite the same again – normally of you stray from the track the watch alerts you and you can see which way you have went wrong and correct yourself. There seemed to be a delay which meant the watch showing me still on track for up to 5 minutes after I had strayed before updating essentially rendering it useless for nav.

Anyone who has ever had to navigate in thick mist and/or dark knows just how easy it is to stray from a track or end up on a sheep trod going the wrong way. Of course, I had a map and compass and am competent in using them however they don’t help when your attempting to micro navigate through farmland were often there is no path and you are trying to hit a fence or style at the other end of a field.

One particular wrong turn led me to a corner of a field which had no obvious exit other than scaling a barbed wire fence and leading me to rip my waterproof pants and curse accordingly.

The following miles were more bleakness and I was at a very low point throughout until daylight arrived as I reached Cowling and I perked up a little.

What really perked me up though was arriving at Lothersdale to find the Craven Energy Tri club had setup a gazebo and were serving bacon sarnies, hot drinks free of charge and even some shelter if you wanted to have a power nap. This was proper Spine magic.

I felt positive again and enjoyed the climb over Pinhaw Beacon and the low level route through to Gargrave where I popped into the Co-op for some much needed refreshment and supplies.

More farmland before arriving at Malham and the steep climb up to the Cove. I passed a couple of lads at this point – Mark who I had last seen back at Stoodley Pike and a Scottish lad called Martin (Heggie). I didn’t recognise Mark at first as he’d had his hood up back then but he recognised me from my cough which was still in full swing.

A few more miles and we arrived at Malham Tarn monitoring where there is a maximum stay of 30 minutes.

There was still 25 miles to go at this point and it had just turned dark so I made full use of the 30 minutes and utilised the hot water available to had a dehydrated meal.

Upon leaving the tarn I was greeted with mist so think I could only see my feet below me, not even the walls to the side of the trail. This was going to be hard work.

And it was, constantly checking I was still on course on the long climb up Fountains Fell and the roads and paths beyond. I arrived at the base of Pen-Y-Ghent and began the stiff climb. Easy going at first but then trickier as you hit the rocky pavement and scrambly ground beyond.

No problem in good conditions its not even a graded scramble but in thick mist, wind and wet slippy rocks it was certainly a challenge and a bit hairy in parts trying to get the right line when I couldn’t see what was ahead. It had again started raining by now adding to my misery.

From the top it’s a long descent over an increasing stony path which played havoc with my feet.

At one point I strayed off the path, and took a minute to get my bearings before setting off again but why was I going uphill – the path was all downhill to Horton right? I realised I’d done a 180 degree turn and had just doubled back on myself. Come on Brooksie get a hold of yourself.

I arrived at the next monitoring station at Horton for another brief rest. Mark and Martin arrived within minutes of myself which I was quite surprised at given I’d left Malham Tarn before them and felt like I’d been moving well on that section.

“Did you take the diversion” I was asked.

Hmm no which diversion is that?

“Oh they’re diverting people to miss out Pen-Y-Ghent because of the conditions up there.”

Apparently someone tried to ring me to inform me of given diversion but my phone was switched off so I got the full Monty (which by my reckoning added at least another hour).

We all set off together and had a good chat on the next dire section. Mark was ex army and had previously dnf’d the race. He’d had a terrible night sleep before the race so his intention was just to complete it. Nerveless he was moving well.

Martin was a top level ultra runner having podiumed at various races, however he was recovering from COVID and adjusted his race ambitions accordingly. 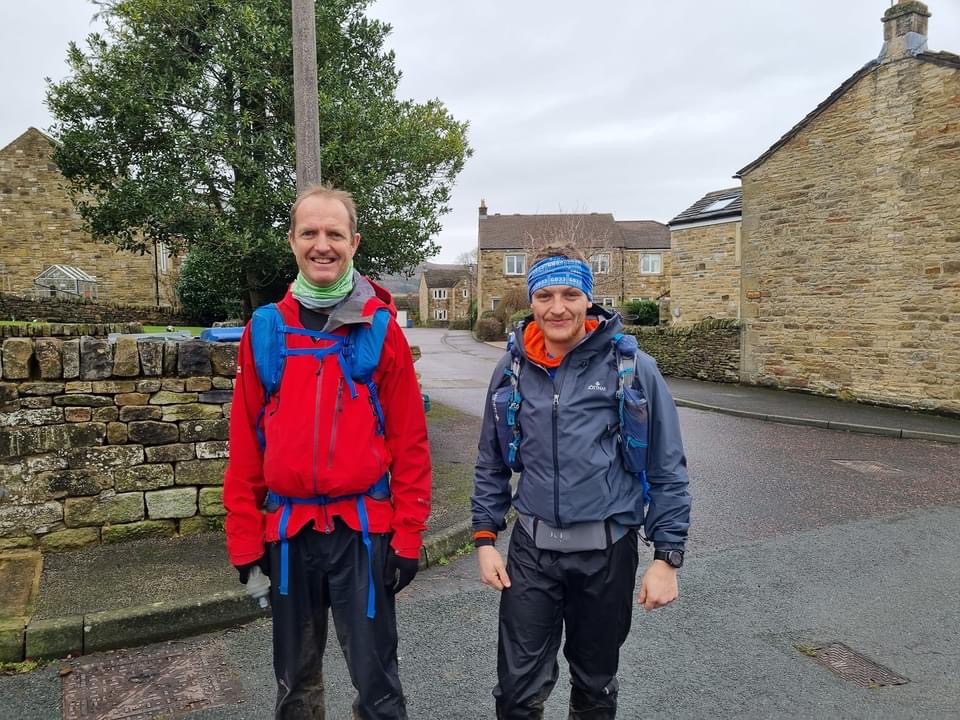 We maintained a decent pace and the banter was good. We eventually caught up with another racer just before the high cam road. He was going through a tough patch so we slowed to his pace and Mark spent some time chatting with him and getting his spirits back up.

We finally reached the high cam road which was around 8 miles from Hawes. Because of the slowing in pace I had started to get really cold so I pushed on a bit harder to try and generate a little heat.

In poor conditions the high cam road is a truly godforsaken place. Its high (around 600 metres) very exposed to the wind from which there is no hiding and as per the previous 6/7 hours all I could see was thick fog and the ground directly beneath my feet.

Nothing is waterproof forever and I could feel water seeping through various places. My neck was wet with water coming in through the hood of my jacket, my midriff was wet with water seeping in through the pockets (the only flaw I have found with the jacket), and even my elbows were wet. I couldn’t understand why at first and then I realised that water had been dripping down my arms from my waterlogged supposedly waterproof gloves all the way down my arms.

My cough was getting worse too and bothering me more than it had been when I set off from Hebden.

I felt sick and couldn’t face eating anything but I knew that I had to, so tried to push a few pieces of chocolate into my mouth and suck on them.

I was utterly exhausted and wanted nothing more than to stop but stopping for more than a few minutes in these conditions meant risk of hypothermia. There is no shelter anywhere and I knew I just had to dig deep and push on – every step forward was a step closer to Hawes.

Imagine walking on a treadmill for nearly 24 hours. Now imagine turning off the lights apart from the headtorch you are wearing and filling the room full of mist so all you can see is your feet. Now imagine turning on the sprinklers in the room, but the water isn’t coming down horizontally its coming in sideways, in front and from behind – blowing into your face and soaking you. Now imagine the surface of the treadmill isn’t smooth – rather it’s a combination or hard stony paths which bruise and batter your feet, waterlogged peat bogs which threaten to swallow you, and muddy farmers fields with ankle deep mud akin to being in the Somme.

Also imagine that the treadmill isn’t flat, its constantly going up and down at various angles – testing your balance and ankles.

Oh and also imagine that you aren’t just walking in a straight line on the treadmill, you have to navigate sometimes non-existent paths on the ground and be constantly alert. And when you get to the end after a short rest you still have another 160 miles to go before you can stop.

Finally after an age I arrived at Ten End, the end of the high cam road and the descent into Hawes which also seemed to go on forever but thankfully I was out of the wind and the rain stopped too.

I finally arrived at Hawes YHA more battered, both physically and emotionally than I’ve ever been at 2am. The place was heaving with people both coming in and leaving. I had some food and collapsed into a bed in one of the dorms utterly spent.