The road to Chicago started on a whim, I knew Darren was going for all 6 stars and when he mentioned that he was applying through the ballot I thought “let’s chuck my name in” never expecting to get drawn out. The application process is really easy and you find out around 6 weeks after it closes (which is fast compared to London marathon).

Again, unlike London, they draw names every 30 minutes and only tell you if you are successful once they have your payment (that you authorise when you apply via the ballot – no option to pay later). Round one, Linda’s in, round 2, Woody’s in, round 3, nothing, round 4, nothing, round 5 – I’m in! Get in, first time applicant and 3 of us are in. Sadly it was a no for Darren so he quickly found a charity to ensure he was on that plan. I also had to break it to Mark that we’d be sacrificing our main summer holiday for a race, surely I can sell him that right?

Training for marathons is always challenging, the miles are high, you’ve got to factor in food/fuel/race conditions and making it fit with work/family is often tough. I’ve been lucky in the past to have great friends to train with but this time, I felt like my usual crew weren’t up for running (for various reasons) so it’s been good to reach out to others and run with them along the way. Some of the miles were enjoyable, some very lonely but all a mental challenge to get it done. I’ve also been lucky that I’ve never been badly injured (well apart from the nana hips twinging every now and again) but nothing that has stopped me in my tracks, until 4 weeks before Chicago. Let’s just say a run in with a tree stump had me not running for 2 weeks and only doing small miles the following 2 weeks. I missed 2 of my long runs and all of the taper. Thankfully I was able to strength train so still keep some level of fitness but when you know you’re going to be standing on the start line having only ran 6 miles, hoping it’s going to hold up – it brings another level of fear.

We arrived in Chicago a few days before the marathon as I wanted to do some sightseeing and make sure I had everything I needed well in advance. Also, recent airline disputes made me nervous about leaving it so close so we chose to fly in on Thursday. Friday morning I collected my number from the expo, which is standard for all world majors, and the security was mega tight! The expo itself is a great experience to see exhibitors, meet the pacers, listen to some experts and buy the latest running kit – oh and in America they were giving away beer at the expo too. The highlight was our American school bus driver, who got lost! Having met up with Lee, nerves were starting to kick in, I really was going to run my second world major in 2019.

On Saturday we ran the official 5km, which was great to run around the south of the city on closed roads. It had a start time of 8am so we jogged down from our hotel and heard a shout of  “Saltwell, wey this is like a cross country meeting!” I turned around and there were three guys from Heaton Harriers who also flew in on Thursday and were taking part in the marathon too. Darren turned up with only 5 minutes to spare and off we went. A nice relaxing run for which we got a great medal and hat too. That day, we probably did a tad too much walking (I clocked up 30,000 steps) but I guess that’s what happens when you’re away on vaction. We all met up that afternoon at Navy Pier (the biggest attraction in the mid-west) for a social beverage and make arrangements for our 06:30am meet up the next morning.

Sunday morning – alarm goes off at 04:45 which is super early. I undertake the usual routine with a change, porridge! I never do porridge but nowhere was open for breakfast before 6am, even our hotel didn’t have any arrangements for pre-marathon breakfast (damn you Trump!). Mark agreed to walk to the start with me and set off in darkness. The paths were full of runners and our hotel was a mere 10 minute walk from the start, which was bizarre. It seems the done thing to do in USA is to wear your old pjamas to the start and chuck them away – genius! 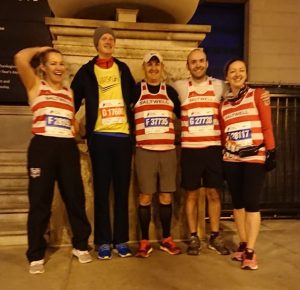 The first of our gang I met with was Lee, who was cold to bone dressed in stuff from a jumble sale, quickly followed by Darren (wearing his old Christmas jumper) Linda and Woody. We were all a little nervous, especially Lee who was pushing for a personal record. We wished each other well and made our way to our respective starts.

The start again was full of security (not something you see at London) and we joined the envitable queue for the most horrific portaloos ever. 07:25am and we were in our start pen. We chatted amongst us about the miles ahead, the plan, the meet up at the finish and just generally soaking up the atmosphere. 07:45, the first wave goes off. 08:00 the gun goes and we’re off!

Chicago is surrounded by skyscrapers so no luck with the gps signal; I had already decided that if I was to run this marathon I’d run it with my watch on silent and be grateful to be running. The race is also great for spectators as you set out from Grant Park and head into the city so spectators can use the river walkway to see you at mile 1, 3 and 13. Darren and I agreed to run together as neither of us was feeling great, with Linda saying she’d see how she was getting on. Mile 1, feeling strong and loving life. The crowds were brilliant, all wrapped up in their woollies and hugging coffee cups. For this early in the morning I couldn’t fault their enthusiasm. Mile 2 passed in the blink of an eye and sadly we’d lost Linda. I hoped she wasn’t far behind and that she would catch us soon. Mile 3, we saw Mark and that gave us a lift for the second loop up towards Lincoln Park and the old town. 4,5,6 passed just as quick as the previous miles, with each mile I was muttering to myself I’m grateful to run because… various reasons from friendship, health, family, support, life and general reflection. Mile 7 I heard a familiar “Alreet Shav” from Woody, he was cruising despite me putting fear in him that eating pineapple so close to the start would have him running for a portaloo! He was effortlessly striding on so agreed to see him at the finish. A lovely loop around the Old Town supported by numerous drag queens signing their best Beyonce songs, then followed until mile 12 and the foot decided it had other reasons for wanting to run, or stop running. I quickly nipped off to the loo hoping a 30 second sit down would shut it up. It did and off we went again.

We headed back into the city and at mile 13 passed Mark again and through the halfway in 02:04, which was great considering the lack of mileage I’d done. Darren was staying at mile 18 so our plan was to get to there without stopping. Bad plan, the foot turned into a burning hot rod of iron by mile 14 so we agreed to run to each water station, have a drink and then carry on. Mile 15, thought Linda would of surely caught us up but we carried on fuelled by Gatorade and mint cake. Mile 16, I felt sick but thankfully someone had some Cola which pulled me round, The next few miles were a blur, with various stops for water / Gatorade and biofreeze on Darren’s knackered knee. Mile 19.something Linda caught me (Darren was on his 5th portaloo stop) and whilst she was feeling good she was pleased for the company. We jogged on for a mile until Darren caught up. I had asked her to push on but she said she’d rather have the company and enjoy it than a pb. We turned into chinatown and we’d reached the 20 mile point, no quitting now! Just when our spirits were dipping the band on the sidelines were playing YMCA so we frantically joined in waving our arms in the air to the music. This is what makes marathons great, you feel like garbage but still find the joy in the simple things that unite people. 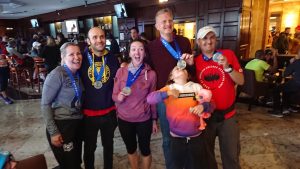 We plodded on through Boylestown to throws of music and crowds cheering on then we passed the beer truck (yes they give you beer on a marathon) turned the corner through the park for the final 3 mile stretch. It was at this point Darren hit a low, like a hangry man that hadn’t sleep for month or eaten for weeks! Nothing was lifting the mode, no amount of hugs, reasoning and cheering him up, it all fell on deaf ears. We shuffled on for another mile until the next biofreeze point for more gel on his knee and Linda needed some too. I decided to take on water for the final bit. After more music and support from the crowds I knew we were nearly there. 800meters to go, we were almost there – running the same road that we’d ran the day before and knowing it was almost done. Darren stopped again, doubted he could finish so this time it was more a link of arms than talking and he was moving again. We counted down second by second turned the corner and we could see the finish. After Darren beat me by one second on the previous day, I ensured I returned the favour. 04;39;57 and done!

We crossed the finish line arm in arm and quickly congratulated each other for achieving another world major. To my left I saw a lady in floods of tears so I hugged her, saying well done and rejoined the others. We grabbed water, a medal, space blanket, fruit & nuts then beer! I mean real beer not the alcohol free stuff you normally get. There was no queue for photos either so we had a couple of photos and headed for the baggage / meet up point.

Everyone had done better than expected, Lee getting a PB by over 20 minutes and Woody enjoying it. Celebratory drinks followed then the Miami boys headed off to meet their new running group. We decided on replenishments of beer and burgers.

All in all, Chicago has been my best marathon experience to date. I don’t know whether it’s because each area we ran through was different and diverse, or the crowds being brilliant, or it being an amazing city, or deciding to run it a gratitude marathon focusing my thoughts on the best things in life or because it’s a world major – all inspired to run by Darren and for that, along with the 26.2 miles of company, I truly thank you.

I can’t recommend this race highly enough, it’s definitely a once in a lifetime experience. I could write on and gush more about it so feel free to ask me.