I’ll start my report with a little insight into my training, it was hard.  Don’t get me wrong marathons never ‘easy’ but after training and running 6 of them some feel less difficult than others.

I didn’t ‘feel’ it this time, I felt sluggish, unmotivated and just generally meh.  It’s not the first time this has happened and I’m sure it won’t be the last.  If there is one positive I did take out of my training it’s that I completed the majority of it and without any real injuries.  That’s the thing about me, I may not be the best runner, definitely don’t have the best physique and my diet could be described as questionable but I’m determined.  Once I’ve set my mind to something I’ll follow it through.  Those Wednesday night hill reps on my own, no problem.  If nothing else it builds mental toughness, something that may come in play during a marathon.

If there’s one bit advice I’d give to anyone wanting to do a marathon it’s follow a plan.  They may be boring but they focus you and everything is set out in front of you to follow.

Our alarms were set for 5.30am, those of you who have read any of my marathon reports previously should already know by now that breakfast was of course pasta!!

Myself, Linda and Woody had met with Lee and the Shav the day before and had agreed to meet at a point close to the start, we obviously had to get the usually hoops pre-race photo.  It was a cold morning the sun hadn’t yet risen but the masses were already gathering, we quickly got our photo taken and headed off to our ‘Corals’.  We weren’t all in the same coral, so Woody and Lee headed off together towards theirs, whilst myself, Linda and the Shav headed towards ours. The queues to the toilets were huge, we must have waiting for about 30 mins.  This comes onto a bit of advice, not just for a marathon but any race,  take a throw away top, it keeps you warm and you can wear it up to the start of the race,  my personal favourites are Christmas jumpers hence those of you who may have noticed my penguin jumper photo.   The girls were convinced into taking a dressing gown for their next race.

Before we knew it we were getting called forward to start our wave, the elite athletes had started some 30 minutes earlier and were already onto their 5th/6th mile, if only. Then again they probably seen Eliud kipchoge’s marathon time the day before and thought the same!

The start of the Chicago marathon was pretty spectacular a myriad of skyscrapers before our eyes. That’s a great thing about major marathons, you get to run in the middle of the road in the centre of a busy city seeing things from angles you wouldn’t normally get to see.

Before we set off we all agreed to run it together.  The Shav got an injury a couple of weeks before the marathon, Linda had been injured for a few weeks and her training hadn’t went well and I wasn’t really feeling it.  So off we all set to start our 26.2 mile journey.

Within the first few miles Linda had started to drop back, myself and Nic slowed to down run with her but were told just to continue on as she wanted to just go at her own pace.  The first miles went quickly, we were running just over 9 minute miles which was better than we had talked about but it felt comfortable.  Around the 7 mile mark required a ‘pit stop’  Nic continued on, despite only being gone for 60 seconds or so if felt like ages before I caught up with Nic.  Its quite difficult looking for someone as you’re running along scanning the horizon but the great thing about wearing the hoops is that they’re quite distinctive.

On approaching I noticed that there were two hoops tops. During my pit stop Woody had caught up with Nic after a few minutes running and talking we asked Woody if he was continuing with us or going on his own.  In truth I wanted him to head on, he’s obviously faster than us and more so when he’s not pushing himself, those who know him or have ran with him know he never shuts up!!

Fortunately he had decided that he was ‘going to see what he could do’ and headed off.

We were approaching about the 9 mile mark when Nic started to feel her foot.  In truth she had felt it earlier but wanted to get as far along as she could.  A toilet break give her a much needed rest and we took the opportunity to refuel, I was asked if I wanted to head on by myself but to be honest I was happy to have the company.

It was a few miles later that we headed through boystown.  We subsequently heard later on that boystown, as the name suggest, was the first guy neighbourhood in Chicago (possibly America).  Queue drag acts, singers and dancers aplenty, you’ve gotta love marathons..kinda.

Approaching half way we heard the distinct shout of hoops.  Mr Shav had spotted us and was waving frantically.  Its always nice to see a familiar face when running, more so when you’re in a foreign country, it gave us both a lift.

It wasn’t too long after seeing Mark that a felt a bit of pain in my knee.  I hadn’t felt anything in training, so thought it might have just been old age however as we continued on the pain grew increasingly worse. Nic could see that I was grimacing and keep asking if I was ok.  Stubbornness responded with yes fine.

After asking numerous more times finally I told her that my knee was in bits, I told her to just continue.  After running with you all this way and you accompanying me I’m not going to leave you now was the reply.  Gotta love your running buddies, always there when you need them!

With about 4/5 miles to go Linda caught up to us although I didn’t notice this as I was having a comfort break (this too is a recurring theme for me).  As is tradition we asked her if she wanted to go on without us but she was happy to join in and complete the rest of the marathon together.

The rest of the marathon was a mixture of running walking and a lot of frustrating sighs and cursing, from me.  It’s nothing to do with any expectation of times it’s just that I want to keep moving at my own pace and when I can’t it gets really annoying for me. 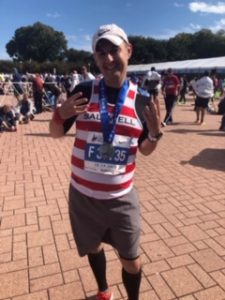 Nic and Linda tried their best to keep my spirits up and to be honest albeit they probably couldn’t tell without them being there I really would have considered stopping that’s how frustrating it was for me.  This is where I refer back to my earlier statement about mental strength, without those lonely hill reps on a Wednesday I personally don’t think I would have continued.

The finishing line couldn’t have come at a better time, usually I really enjoy the last half a mile or so, the noise, the cheering, the crowds and everyone getting excited coming into the finish but I just wanted it to end.

As we approached the finishing line Nic ran slightly ahead to get over the line before me, this was revenge for the 1 second I beat her by in the 5k the day earlier.  We crossed the line in 4 hr 30/40 something, for me it didn’t really matter.  As with any marathon any disappointment had soon turned into happiness once I’d had an opportunity to get changed and have a beer with the rest of the gang.

Running, jogging or walking 26.2m is still an achievement in anyone’s books and I’ve had my fair share of success and disappointment over this distance.  Ultimately though my goal of becoming the first Saltwell Harrier to complete the 6 big marathons still exists and a poor marathon won’t put me off going for the next one, Tokyo.

My goal has and will remain to get all 6 stars.  Ideally I’ll be the first saltwellian to complete the feat but if it doesn’t work out that way then so be it, it will take nothing away from the achievement, when it happens.

Despite the hurt, frustration and a camp posture this is what it looks like to finish a marathon.  Everything is forgotten but the achievement!